Chitwan, June 26 (RSS): The Narayangadh-Mugling road has been blocked at a place called Charkilo due to a landslide this morning.

The District Police Office, Chitwan said the landslide occurred at 5.20 am today and blocked the highway.

Spokesperson for the Office Shiva Sharma Acharya said although the task of removing the landslide debris has started, it might take up to four hours to open the road for traffic as the landslide is huge.

The highway has been blocked by mudslides and opened on and off after it started raining since two days back. This has caused problem to passengers as they cannot reach their destinations on time. 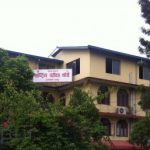